MERS, the electronic mortgage registry that was supposed to simplify the foreclosure process for lenders, is facing multiple investigations for their role in tens of thousands of problematic foreclosures, Reuters reports.  The attorneys general of Delaware and Massachusetts have launched investigations.  County recorders and clerks in several different states have raised concerns that MERS does not record the proper paperwork as required by state laws.  MERS services 32 million, or 60%, of the country's mortgages.
In response to the increased scrutiny, MERS has changed its rules.  Its members are no longer allowed to file suit in MERS's name.  They must also now obtain and record mortgage assignments before filing suit.  The current robo-signing controversy involves the mass production of mortgage assignments, oftentimes long after the suit is filed, by MERS's members.  That will change, but only slightly.  MERS is still going to prepare the assignments, but they now just require the assignment as a prerequisite to filing suit.  So the robo-signing will now just take place at a different stage in the game.
Plus, the legitimacy of the assignment will still be at issue.  They just won't be in the court file. You'll have to go to the recorder's website to get a copy.  But the homeowner can then challenge the assignment as part of the case.  I don't have any specific pointers for attacking the assignments off the top of my head, but I can tell you that the first thing you should look for is the name Linda Green anywhere on the document.  Anyone who doesn't know that name should click HERE, or google it.
Posted by Michael W. Huseman No comments:

Nobody!!!  There were no guesses for Hole 10.  I guess the coffee mugs will roll over until next year.  And I also heard some good suggestions for better prizes next year.  So next year's contest should be interesting.
It's great to see the loyal Law Blog readers suggesting great prizes that I should buy with my own money so that they can win them for free.  Ha!!  Great times at the golf outing once again though.  See everybody next year. 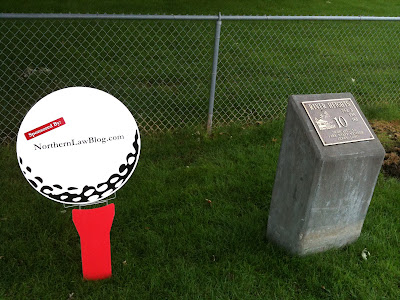 I am a member of the ISBA’s Young Lawyers Division Section Council. We are holding our annual Golf Outing to benefit the Children's Assistance Fund at Cog Hill, Course #3, on August 3, 2011.

There will be a one hour Professional Responsibility CLE on the Changes to the Rules of Professional Conduct by Mary Andreoni from the ARDC at 11:00 a.m. There will be a shotgun start to the Golf Outing at 1:00 p.m. with dinner and an open bar following the event. You are welcome to come for dinner only if you are unable to golf that day.

Information and online registration are available at https://www.isba.org/sections/yld/golf. Please do not hesitate to contact me with any questions you may have regarding the outing.
Posted by Michael D. Wong 3 comments:

The rescheduled Golf Outing is coming up on Friday, July 22nd.  There is still time to enter the Second Annual Northern Law Blog Golf Outing Giveaway Contest.  The winner does not need to be present at the Golf Outing.  Click HERE to review the details and cast your vote.  There's only a few holes left to choose from.
Posted by Michael W. Huseman 1 comment:

I told you earlier that I was going to write about a couple of interesting trials to keep up the Casey Anthony momentum.  The first one involved the Government's attempt to rob an innocent family of ten gold coins worth about $75 million.  The second one was going to be the Roger Clemens trial.  But, as you know, the judge declared a mistrial on the second day of trial.  So instead of getting into the details at this point, I'll just tell you why everybody yells "Screw you Rusty!" to Clemens' lawyer Rusty Hardin when they see him.
Mr. Hardin represented the estate of J. Howard Marshall, the Texas billionaire who married Anna Nicole Smith.  There was a very long and contentious trial concerning his billion dollar estate.  At one point during Hardin's cross examination of Anna Nicole, she was crying and sobbing while describing her love for her deceased husband.
"Mrs. Marshall, have you ever taken acting lessons?" Hardin asked.
"Screw you, Rusty," she shot back.
Now it is not uncommon for people in public to see him in the street and yell "Screw you Rusty!"  And he loves it!  That's hilarious.

Mr. Hardin is known for asking the right questions at the right time.  There is another story on this website about an exchange in the Calvin Murphy trial.  He is the NBA Hall of Famer who was charged with sexually abusing five of his own daughters.  During the cross examination of one of the daughters,  Hardin was getting nowhere with his questions when he suddenly stopped and asked her, point blank, “Do you sometimes make things up?” Amazingly, the daughter answered, “Yes.”
Instead of stopping there, Hardin pressed on. “Is there any way for the jury to tell when you’re making something up?”

Intrusion upon seclusion: A new tort?

Email ThisBlogThis!Share to TwitterShare to FacebookShare to Pinterest
Labels: Torts

What's the next big trial?

Casey Anthony sure got everyone interested in the legal system for a week or two.  To keep that momentum rolling I have selected a couple of interesting trials from around the country to tell you about.  The first one doesn't have the nationwide allure of a dead toddler and the Miami nightclub scene, but it does involve a whole lot of money and has a similar theme of governmental overreaching.

The first case is United States of America v. Ten 1933 Double Eagle Gold Pieces.  In 1933 President Franklin D. Roosevelt ordered the destruction of all Double Eagle coins shortly after they were minted due to economic concerns.  A very limited number of coins escaped destruction.  A massive Secret Service investigation during the 1940s and 1950s linked every known Double Eagle to one man, Isreal Switt, but the government decided not to prosecute him.

Isreal Switt died in 1990.  His estate was probated without complication.  But in 2004 his daughter discovered a previously unknown safety deposit box that contained 10 Double Eagle coins.  She took the coins to the U.S. Treasury to have them authenticated, but the Government seized the coins and initiated forfeiture proceedings in federal court.  The trial started last Friday.

The daughter has precedent on her side.  The only other Double Eagle to surface in the last 60 years occurred in 2000 when a British coin dealer was arrested by Secret Service agents during a sting operation.  The coin dealer was acquitted of all charges, then sued the government for the return of his coin.  As part of a settlement in that case, the government authorized an auction of the coin.  It brought $7.6 million. So the daughter is looking at a big payday in this case if she can prevail. The trial is supposed to conclude this week.  I'll try to follow up with a report.
Posted by Michael W. Huseman No comments:

Unreasonable Legal Fees: How Much is Too Much?

What makes a flat fee for a lawsuit so large that it is unreasonable?  A recent news article makes me wonder if a flat fee would be unreasonable just because it may be two or three times higher than any other law firm would charge.  According to THIS post from the Wall Street Journal Law Blog, Joe Nacchio, the former CEO of Qwest Communications, the high speed internet company, has sued his former lawyers in New Jersey state court for malpractice, claiming that they were negligent for grossly over billing him.

His lawsuit alleges that his lawyers breached their fiduciary duties because they charged him a flat fee of $5 million to defend him on insider trading charges and an additional $20 million to defend him in several related civil suits.  The full complaint is linked HERE.  The complaint is pretty short on facts relating to the underlying litigation.  Mr. Nacchio does not even state how many different civil suits there were.  Nor does he allege the scope of the litigation or the time frame.  He doesn't really state why the fees were excessive, he just concludes that they were.

If the Nacchio case had happened in Illinois, and if we knew a little bit more about it, we could analyze it under Illinois Rule of Professional Conduct 1.5, which prohibits lawyers from collecting an unreasonable fee or an unreasonable amount for expenses.  Under Rule 1.5, the factors to be considered in determining the reasonableness of a fee include the following:
I don't disagree with anything in the Illinois rule, but the sophistication of the client should also be a factor.  The CEO of multi-billion company who is facing 25 years in prison and potential civil liability into the hundreds of millions may set out to hire a specific law firm even at an increased cost. The client may wish to secure a particular lawyer or law firm's reputation, skills, experience with the judge, etc.  The client always has the option to seek a competitive bid from another law firm, but sometimes people are not simply looking for the cheapest lawyer.

In this case, the client signed on the dotted line with a particular lawyer, Herbert J. Stern.  Mr. Stern was a federal judge for 13 years.  He's a former U.S. Attorney.  He charges a lot of money.  Clients know that before they call him.  I'm guessing Joe Nacchio didn't pick his name out of the yellow pages.  I don't see how Mr. Nacchio can now claim that a flat fee to which he already agreed is unreasonable.  Sounds like a case of buyer's remorse following his 70 month sentence and $63.6 million in fines and restitution.
Posted by Michael W. Huseman 5 comments: