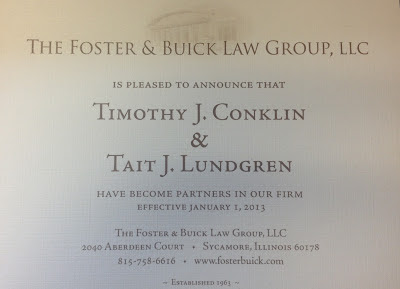 I just received the announcement from Foster & Buick Law Group, LLC that Tim Conklin and Tait Lundgren have become partners in the firm. Congratulations guys.
Posted by Michael W. Huseman No comments:

Most people do not know that the minimum insurance coverage required of drivers in Illinois is $20,000 per person/$40,000 per accident.  Other people may have heard of this, but don’t exactly know what it means.  Failure to really understand minimum coverage until it’s too late can leave an injured motorist in a position where they have to pay for substantial vehicle repairs and outrageous medical expenses out of their own pocket.  This can lead to the loss of thousands of dollars because of an accident caused by another’s negligence.  Is it fair?  No.  Does it happen?  Absolutely.

Understanding what the policy limits numbers mean is the first step in understanding the various types of coverage.  In the example above, $20,000 per person means that the most the at-fault driver’s insurance company would have to pay to a single person injured due to the negligence of its insured is $20,000 for a particular accident.  The $40,000 per accident limit applies to the maximum the insurance company will ever be required to pay for an accident no matter how many people were injured and no matter how significant the injuries.  For example, assume 4 people were injured due to the negligence of a driver with this type of policy.  Every person in the wreck had treatment consisting of over $30,000 in medical bills.  No one person of the 4 may receive more than $20,000 for their injuries (inclusive of medical bills).  Additionally, the maximum the insurance company is required to pay out to all 4 of the injured parties is a TOTAL of $40,000!

Fortunately, many of us purchase what is known as underinsured motorist coverage.  Like uninsured motorist coverage, underinsured coverage puts your own insurance company in the shoes of the negligent party when the negligent party does not have enough insurance coverage to pay for an accident victim’s injuries.  Typical underinsured motorist policies are written with limits from as low as a minimum of $25,000 to a maximum of anywhere from $300,000 to $500,000.  Additionally, some people choose to purchase a PLUP or personal liability umbrella policy.  PLUP coverage picks up where the regular auto insurance policy leaves off.  For instance, assume you have an auto injury with damages that are equivalent to $1,000,000.  The person that caused the accident has an auto policy with limits of $300,000.  You can recover the $300,000 from the auto carrier and attempt to recover the remaining $700,000 from the PLUP policy if the at-fault driver has one.

Many clients ask why they must pursue their own insurance when they were not at fault.  It is a great question and one with a variety of answers.  One important reason why you should is because you are paying for these premiums in case the exact scenario above occurs.  If you pay for these premiums for the rest of your life and choose not to access them even when you need them, the insurance company enjoys a substantial windfall.  The other question that is often asked is why not go after the at-fault party individually and garnish his or her wages.  This is often a hopeless endeavor which results in chasing an individual and his or her assets across the country in order to satisfy the judgment.  Furthermore, if the judgment is large enough, the person may simply file bankruptcy and you will be lumped in with other creditors.

With any type of case, it is always best to engage in a free consultation with an attorney who practices plaintiff personal injury law so that you do not do anything to jeopardize your claim.  In the case of the various inner workings of uninsured and underinsured motorist claims, this is especially true.
Posted by Dexter J. Evans 1 comment:

All HOA and Eviction Lawyers Should Read This Case

One of the more powerful and least understood provisions of the Forcible Entry and Detainer statute allows condo associations and certain other community interest associations to evict homeowners from their units for the non-payment of assessments.  The association can then place a tenant into the unit and can apply the rental proceeds to the homeowner's delinquent assessment balance.

There are a ton of practical considerations if you ever find yourself (or your client) on either side of this equation.  When can the homeowner get back into his house?  What happens to the tenant with a one-year lease if the homeowner pays off his balance with a lump sum?  What fees can be added onto the homeowner's balance after he is evicted?  Lots of questions that would take a lot of research to answer.

Fortunately, the 1st District Appellate Court just issued one of the most thorough opinions that I have read on the subject.  There are dozens of great nuggets in this case for lawyers to use when representing the association or the homeowner.  The Court even spends the last four pages of the opinion answering procedural questions that weren't even addressed on appeal, but that the Court thought needed to be explained anyway.

The case is a must read for condo/eviction lawyers.  Here is the link:

The City of Rockford has a mid-level job opening in its law department.  The City requires five years' experience, but the job posting says that "any satisfactory equivalent combination of experience" may be substituted for the required experience.  Sounds like they're asking people to argue why they're qualified.

This is a very attractive career opportunity for someone with the right experience.  I copied the entire job posting below.  There is contact information at the bottom.

The City of Rockford is seeking qualified applicants for in-house counsel to focus on all areas of employment law including EEOC, FMLA, Worker's Compensation, employee relations and collective bargaining. Primary responsibilities include the management, coordination and participation in the defense of grievances, arbitrations, claims and lawsuits asserted against the City of Rockford. This position may also provide support for various city council committees.

Requirements: Graduation from an accredited school of law and five years' experience in prosecuting municipal cases. Any satisfactory equivalent combination of experience and training which ensures the ability to perform the work may be substituted for the required experience. Must be a licensed member in good standing of the Illinois Bar. Starting Salary $67,204.80 / DOQ.

Applications and resumes can either be dropped off or mailed to: City of Rockford Human Resources Department, 425 E. State St., Rockford, IL 61104 or emailed to HumanResources@Rockfordil.gov. Applications can also be faxed to 815-967-6924. Please visit the employment page of our web site, www.rockfordil.gov for more information.

The City of Rockford is an equal opportunity employer."

Casey Anthony filed Chapter 7 bankruptcy on Friday, January 25, 2013. The Northern Law Blog has obtained an exclusive copy of her bankruptcy petition.  (Well, kind of...I found it on the internet.)  The petition is pretty interesting.  Casey discloses zero income.  She says that she's been unemployed for four years.  She also lists zero monthly expenses.  No rent, no utilities, no car payment, nothing.  Also, the lawyer who filed the case provided is representing her for free.

She discloses nearly $1 million in debt, but the actual number is a lot higher.  More than half of her debts are listed as an "unknown" value.  Her largest creditor is her former lawyer, Jose Baez, the guy who who got her acquitted of murder charges. She owes him $500,000.  I hope his business picked up after he won that case.

There was one other curious aspect that I wanted to point out.  DePaul University College of Law is listed as a creditor with an "unknown" amount of debt.  DePaul's debt is described as "consulting fees."  I don't remember hearing about their involvement during that case.  I wonder if any students worked on that case?

The really interesting question, however, is who has standing under Florida law to object to Casey Anthony's discharge on behalf of the deceased minor child.  The estate of the deceased child would have to prove that Casey Anthony caused a willful and malicious injury to the decedent.  If so, the estate would be entitled to a cut of the future income of Casey Anthony, if any.

Anyway, HERE is a link to the petition and schedules if you want to check them out.
Posted by Michael W. Huseman 1 comment: