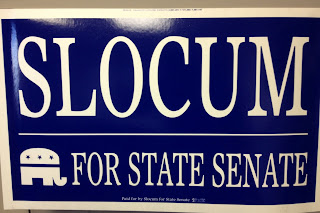 If anyone in the 25th District is willing to place a sign in your yard, or otherwise contribute to the campaign, please let me know or contact SlocumforSenate.com directly.

For a map of the 25th District, click HERE.
Posted by Michael W. Huseman No comments:

In the recent opinion of People v. Baskerville, 2012 IL 111056, the Illinois Supreme Court found that a husband didn’t commit the crime of obstructing a peace officer (720 ILCS 5/31-1) when he allegedly lied to a police officer about his wife’s whereabouts but where the lie didn’t actually impede the officers’ progress in investigating the crime.


In Baskerville, a La Salle County sheriff’s deputy observed a woman driving whose license he believed to be suspended. He followed her home and initiated a traffic stop, but she went inside the house. Her husband then came to the sheriff’s deputy and told him that his wife was not at home and that he was the one that was driving and offered to show him his driver’s license. The husband then went back into the house and after emerging again, told the officer that he could search the house for the wife if he wanted.


Both the husband and the wife were charged with obstructing the police officer based on the false statements and were convicted. On appeal, the appellate court found that that there was a physical act that was required under the statute to obstruct a peace officer and overturned the husband’s conviction on those grounds. However, while the Illinois Supreme Court reversed the conviction, it did so on separate grounds.


The supreme court held that false statements could be considered to obstruct a peace officer and that a physical act is not required, as “applying the dictionary definition, it is evident that 'obstruct; encompasses physical conduct that literally creates an obstacle, as well as conduct the effect of which impedes or hinders progress. Furnishing false information could thus be included within that definition, as it can undoubtedly interfere with an officer's progress". At Paragraph 19 of People v. Baskerville.

For attorneys working in misdemeanor courtrooms, discovery is always an amorphous concept. Unlike felony discovery, which follow Illinois Supreme Court Rules 411-417, misdemeanor discovery is limited to a few statutes and due process requirements. In People v. Kladis, 2011 IL 110920, the Illinois Supreme Court directly addressed whether squad car videos are discoverable by the defendant in a DUI proceeding.

The trial judge sanctioned the state for the destruction of the squad car video. As a sanction, the trial judge would not let the officer testify about the occurrence during which the video was running.

In its ruling, the court looked to People v. Schmidt, 56 Ill.2d 572 (1974) and noted that defendant's are entitled to the following materials:


In Kladis, the Illinois Supreme Court added squad car videos to discoverable items under Schmidt. 2011 IL 110920 ¶ 28. In so holding, the Court noted that squad car videos further the courts' truth-seeking process. Id. Squad car videos are an "integral part" of traffic arrests, and they "objectively document[] what takes place." 2011 IL 110920 ¶ 29. They both help the state prove their case and help defendants decide to take pleas or litigate their claims of innocence.

For attorneys practicing in these courtrooms, they must make these demands for videos early and often—create a record by filing a motion for discovery, issue a subpoena to the arresting agency, and make a demand on the record for these materials.
Posted by Christopher G Sparks No comments:

Illinois Gets Tough on Wage Theft

Illinois Gets Tough on Wage Theft

Illinois amended the Wage Payment and Collection Act (“IWPCA”) to give employees new powers and protections when an employer fails to pay an employee her “final compensation” or otherwise violates the IWPCA (other provisions specify when wages must be paid, what deductions are allowed, and what records must be kept).

The IWPCA requires employers to pay a departing employee all final compensation owed no later than the next scheduled payday. “Final Compensation” includes everything the employer owes the employee for “wages, salaries, earned commissions, earned bonuses, and the monetary equivalent of earned vacation and earned holidays, and any other compensation...”

The amendments to the IWPCA give the employee added rights and powers including to:
· Pursue more individuals for personal liability through a broader definition of employer
· Go straight to court without first filing a claim with the Illinois Department of Labor (“IDOL”)
· Bring a case as a class action
· Recover reasonable attorney’s fees if she prevails
· Obtain additional damages of 2% per month of the amount not paid
· Receive a penalty from the employer of 1% per day if the employer fails to pay the court ordered amount within 35 days of the order
· Sue for retaliation if an employer discriminates against an employee for making an IWPCA complaint and recover her damages, costs, and reasonable attorney’s fees.

Westlaw Headnote of the Day

Neither witness fees nor mileage will be allowed a witness who was too drunk to answer cross-examination.  Fritz v. Fritz, 1894 WL 3292 (Pa. Com. Pl. 1894)
Posted by Michael W. Huseman No comments:

Email ThisBlogThis!Share to TwitterShare to FacebookShare to Pinterest
Labels: Westlaw

Probable Cause in Drug and Alcohol Testing

A recent decision from the Second District highlights the importance of refusing any blood, breath and urine tests when one is suspected of driving under the influence of alcohol or drugs. In the case of People v. Miranda 2012 IL App (2d) 100769, No. 2-10-0769, the Second District held that the results of a urinalysis test which showed that a driver arrested for drunk driving had traces of cannabis and cocaine in his system was invalid because there was no probable cause to allow for the search warrant after he refused testing.
In Miranda, an Elmhurst police officer pulled over Miranda because he believed that he was intoxicated. The officer noticed an open beer bottle and after some investigation, arrested the defendant for driving under the influence of alcohol. Miranda refused the breathalyzer as well as the blood and urine test. The officer applied for a search warrant in which he said that in “his professional opinion... [defendant was] under the influence of alcohol and/or drugs.” After a search warrant was acquired, Miranda’s blood was taken to be tested for alcohol and a urine sample was taken for drug testing.
The results came back positive for metabolites of cannabis and cocaine. The trial court granted defendant's motion to suppress the evidence as it was taken based on a warrant that lacked probable cause, specifically, that the officer only had probable cause to suspect that driver may have been drunk but there was no mention in the warrant or his affidavit concerning drugs. On appeal, the Second District upheld the trial courts decision to suppress the evidence.
The state additionally argued that the implied consent statute meant that the defendant had no right to have the evidence suppressed. However, the appellate court found that because defendant had refused a drug testing, the state had no right to use the implied consent statute to force the withdrawal of the blood and urine, as he was revoking the implied consent.
This is an important case for any attorney defending a driving under the influence of drugs case because it reiterates the importance of probable cause for the type of testing (alcohol as opposed to drugs) as well as the importance of refusing consent.
Additionally, other drug metabolites can stay in a persons system for days longer than the effect of the drug has lasted. For example, metabolites from cannabis can stay in the system for up to 30 days, sometimes even more, depending on the weight of the individual as well as the quantity of cannabis they are smoking. This means that many people who might have had a joint a week ago would be considered under the influence of drugs, as a positive test result would be considered proof of influence in Illinois because of its strict per se DUI law, even if there is no indication that they were otherwise impaired. The only way for a person who may have drug metabolites in their system to avoid a conviction when a test is likely is to do as Miranda did and refuse the test, then challenge on probable cause grounds if it proceeds anyways.
Most of the public doesn’t realize these rules, as they seem counterintuitive, and may give the police a blood or urine sample when they might test positive. Just as you would advise your clients never to perform field sobriety tests or give a breath sample, they should avoid giving a blood or urine sample when suspected of driving under the influence of drugs and Miranda shows how it can be challenged.
Posted by Bryan No comments:

He adopted his adult girlfriend!!

Check this story out! This is one way to shield assets. I'd be nervous that the girlfriend would take off with the money after the litigation! http://www.sun-sentinel.com/news/palm-beach/wellington/pb-john-goodman-adopts-girlfriend-20120131,0,3385741.story
Posted by Brian M. Krause, Esq. No comments: