Mahoney, Silverman & Cross, LLC, a Will County, Illinois AV Rated law firm, seeks an attorney for its civil litigation group with 4-7 years of experience.  Candidate must have an outstanding academic record, exceptional interpersonal and communicative skills and significant experience and demonstrated success in the preparation and trial of civil cases.  Please send your detailed resume (which should describe your professional experience in civil litigation highlighting the types and complexity of cases as well as your experience with discovery, motions, bench and jury trials and appellate review), undergraduate and law school transcripts, and writing sample to: Ms. Julie M. Van Eck, Mahoney, Silverman & Cross, LLC, 822 Infantry Drive, Suite 100, Joliet, IL 60435; 815-730-9500, 815-730-9598 (fax); or via email to jvaneck@msclawfirm.com. All inquiries will remain confidential.
Posted by Michael W. Huseman No comments:

It has been a while since I have had to schedule an eviction in Will County.  They have changed their procedures in the meantime.

They now conduct evictions on Tuesdays and Thursdays.  The Tuesday evictions use the Sheriff's contracted movers.  The plaintiff of course pays for those movers.  If you would like to use your own movers, your eviction will proceed on a Thursday and you must provide four able-bodied movers at that time.

I have also posted these instructions in the Forms Archive of this Blog.
Posted by Michael W. Huseman 3 comments:

The 8th Annual NIU Law Golf Outing was a great success.  It was a beautiful day out on the course and it seemed that fun times were had by all.

But, once again, there were a lot of disappointed coffee-drinking blog readers out there on the links.  The Law Blog sponsored Hole 18 (photo evidence below), which NO ONE PICKED IN OUR CONTEST!!

So, for the third consecutive year, the prizes will roll over.  Next year we need 18 guesses no matter what.  All of the readers should invite their friends and former classmates to subscribe to this blog.  I really want to give away some prizes next year.  So long. 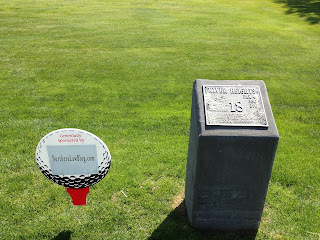 The 8th Annual NIU Law Golf Outing & Awards Dinner will be held on Friday, June 8th at the River Heights Golf Course in DeKalb.  Once again, the Northern Law Blog will be sponsoring a hole at the golf outing.  That means that it is time again for the annual contest to guess which hole we will be sponsoring.

Every year the Law Blog offers a prize to the first person to guess the hole at which the Northern Law Blog sign will appear.  In past years the prizes have been limited to a drink of the winner's choosing at the 19th hole (it's an open bar).  Last year, however, the Law Blog was able to secure this matching set of Dreyer Foote coffee mugs as prizes: 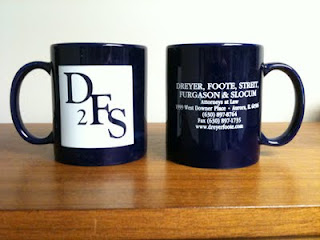 But no one won them.  In fact, NO ONE HAS EVER WON THIS CONTEST!!!  Two years ago we only had a handful of guesses.  Last year we only had nine guesses and no one guessed Hole 10.  I know there were a lot of disappointed coffee-drinking blog readers at last year's golf outing.  So, you will be happy to hear that the coffee mugs have rolled over into this year's prize pool.

Here are the rules.  Simply comment to this post with a number between 1 and 18.  The winner will be determined on June 8th once we locate our sponsor sign on the golf course.  If there are multiple correct guesses, the first one to post wins.  The winner need not be present at the golf outing, although I will have the prizes at the golf course if the winner is present.  If the winner is not present, we will make arrangements the following week for the awards presentation.  Good Luck.
Posted by Michael W. Huseman 13 comments:


The 2nd District Appellate Court recently found in People v. Mains, 2012 IL App (2d)110262 that it was a valid use of the community caretaking exception when police stopped and questioned a motorist because his emergency flashers were on and he was fixing his engine.

In Mains, the defendant was experiencing difficulty driving on a highway and was going between 25-30 miles per hour with his emergency flashers activated. After defendant drove into a church parking lot and opened the hood to work on engine, officers arrived, activated emergency lights and took his name and birth date. Police subsequently discovered that defendant’s driver’s license was revoked and he was arrested. While the prosecution argued that the stop was constitutional under Terry v. Ohio, 392 U.S. 1 (1968) or as part of a community caretaking function, the trial court disagreed, quashing the arrest, while the state appealed.

A community caretaking exception applies “where (1) the officer is performing a function other than the investigation of a crime, and (2) the search or seizure was reasonable because it was undertaken to protect the safety of the general public.” People v.McDonough, 239 Ill. 2d 260, 269 (2010). The 2nd District found that both requirements were met in the instant case. Specifically, the appellate court cited the fact that defendant was driving well below speed limit, which could pose danger to other motorists. Additionally, the court held that asking for defendant's name and birth date was not initiating a criminal investigation. The court finally held that there was no need to determine whether it was acceptable under Terry.

For those interested, I have included two blurbs of cases cited in Mains for cases where the court also found a community care taking exception.

People v. Dittmar, 2011 IL App (2d)091112-“officer’s stop of the defendant was justified under the community caretaking exception because the defendant’s actions of pulling his vehicle to the side of the road and switching positions with the passenger gave the officer reason to believe that the defendant might need assistance due to a mechanical problem or other emergency” Mains at ¶ 14.

People  v.  Robinson,  368  Ill.  App.  3d  963- “officer was  engaged  in community caretaking when, after rousing the unconscious defendant, he asked him to step out of his vehicle and to produce identification” Mains at ¶ 15.

Posted by Bryan No comments: