Update on the Distress Warrant

So, it has been awhile since I last posted. As you may recall, we had filed a distress warrant in DuPage County. Regrettably, before it could be litigated properly, the tenants filed bankruptcy. We had to stop all proceedings immediately due to the automatic stay and a judge ordered us to return their property after the Defendants filed an emergency motion. So, we got the stay lifted but the tenants ended up abandoning the property anyway. I was happy that our clients got to re-let the premises but I would have liked to have seen what would have happened if the tenants had not filed bankruptcy. Would our security interest in the seized property be upheld by the court? Fortunately, we had another similar situation in Kane County. That warrant was issued, the property was seized, and the matter is up for a hearing here in September. Hopefully, this one will get litigated so we can all see if the courts will uphold these actions. Stay tuned!
Posted by Brian M. Krause, Esq. 1 comment:

Email ThisBlogThis!Share to TwitterShare to FacebookShare to Pinterest
Labels: Distress for Rent 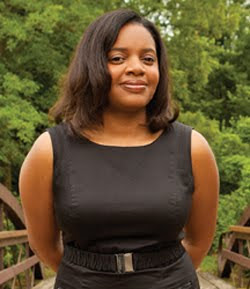 The article is titled "The Job Seekers" and outlines the steps taken by three recent law school graduates as they seek full-time employment.

At the time of the interview, Cynthia was still looking for full-time work, but an editor's note indicates that after the story went to print, Cynthia took a full time job with the American Medical Association. Congratulations Cynthia!!

Sounds a lot like the Home Repair and Remodeling Act issues that have been going around lately, doesn't it? The First District Appellate Court thought so too. They relied on K. Miller Construction v. McGinnis case to reverse the trial court.

As I have discussed in previous posts (here and here), the McGinnis court held that the contractor's violation of the Home Repair and Remodeling Act did not preclude it from pursuing equitable recovery pursuant to quantum meruit. The court reasoned that allowing the contractor to recover via quantum meruit was not specifically disallowed by the Act and would not violate the public policy expressed by the Act.

Similarly, the Court in Carlton at the Lake, Inc. v. Barber, 01-09-0039 (May 20, 2010), allowed the nursing home to recover from its former resident under quantum meruit. The Court found that common law rights and remedies are in full force and effect unless repealed by the legislature. For that to happen, the legislative intent to abrogate the common law must be clearly and plainly expressed, and such intent will not be presumed from ambiguous or doubtful language. After a review of the Nursing Home Care Act, the Court could find no clear legislative intent to limit nursing homes' ability to recover under common law theories.

Also, allowing a common law recovery would not defeat the purposes of the Nursing Home Care Act, which was enacted "amid the concern over reports of inadequate, improper, and degrading treatment of patients in nursing homes," none of which were alleged in this case.
Posted by Michael W. Huseman No comments:

Email ThisBlogThis!Share to TwitterShare to FacebookShare to Pinterest
Labels: Collections 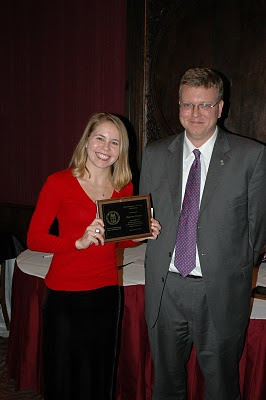 Northern Law Blog contributor Heather Darsie was awarded the Anthony A. DiGrazia Scholarship by the Phi Alpha Delta Law Fraternity.
The Anthony A. DiGrazia Scholarship Program recognizes law student members of the Fraternity who through their involvement in the fraternity and their communities have begun to demonstrate PAD ideals.
Also pictured is another Law Blog contributor, Pete Bastianen, who is a member of the PAD Scholarship Committee.

For information on how to donate to the scholarship fund, please e-mail the chapter here.
Posted by Michael W. Huseman No comments:

Equitable Remedies under the Home Repair and Remodeling Act

Illinois' First District has already held that equitable remedies such as quantum meruit and unjust enrichment are available to contractors who do not have written contracts with homeowners or are otherwise in violation of the Home Repair and Remodeling Act. See K. Miller Construction Company, Inc. v. McGinnis 394 Ill.App.3d 248 (1st Dist. 2009).

Now, the Second District has followed suit. In Fleissner v. Fitzgerald 02-09-0805 (August 9, 2010), the court analyzed equitable remedies under the Home Repair and Remodeling Act in light of previous judicial decisions (Slepian, McGinnis, Bogard, Bilstrom, and Adkins) that have either specifically held or otherwise acknowledged that it is unlawful for a contractor to perform home repair and remodeling work without a written contract.

In Fleissner there was a consumer/homeowner who admitted to the existence of an oral contract with the contractor, admitted that work was performed per the agreement, and admitted to having paid nearly all of the contract amount. The issue was whether the contractor could recover the remaining balance due under quantum meruit or unjust enrichment theories.

While the Court acknowledged that the statute requires a written contract, the Court could not say that the oral contract in this case violated the public policy behind the Act, as there was not a consumer who was deceived by a "fly by night" contractor. Rather, the case involves an honest contractor seeking payment for performed services.

The Court then considered whether equitable relief through quantum meruit or unjust enrichment is available to a contractor relying upon an oral contract despite the Act's requirement that a written contract exist for certain home repair or remodeling work. On this issue, the Second District agreed with the McGinnis court that the Act lacks any clear and plain intent to eliminate equitable remedies available under common law.

The Court held that allowing recovery under equitable theories would not defeat the purpose of the Act. The purpose of the Act is to protect consumers from "fly by night" deceptive contractors, not to bar an honest contractor from recovering for services actually performed. To hold otherwise would allow a consumer to renege on an otherwise valid oral contract after work is performed and enjoy the benefits of his improved property at the expense of the contractor.
Posted by Michael W. Huseman 36 comments:

We acknowledge the distinction in case law between a lien and an encumbrance. A lien is a "legal right or interest that a creditor has in another's property, lasting usually until a debt or duty that it secures is satisfied.

An encumbrance is broader. It may include "any right to, or interest in, land which may subsist in a third party to the diminution of value in the estate, but consistent with the passing of the fee by conveyance." Encumbrances include not merely liens such as mortgages, judgment liens, or taxes, but also attachments, leases inchoate dower rights, water rights, easements, restrictions on use, or any right in a third party which diminishes the value or limits the use of the land granted.

Touhy lawyer James Zouras handled essentially all of the attorney work on the DeLapaz matter until he was terminated by Touhy for unknown reasons. Zouras then started a new firm and took the DeLapaz matter with him. Shortly thereafter, the matter settled and Touhy and Zouras both sought the right to be paid the contingency fee.

The trial court awarded Touhy its contingency fee and allocated a small portion of the fee to Zouras’ new firm on a quantum meruit basis. Zouras appealed.

However, the appellate court relied on an established exception recognized by the Illinois courts, which holds that a discharged firm is entitled to its contract fee and the successor counsel merely entitled to a fee based on quantum meruit in cases where the overwhelming majority of that work was done at the original firm.

The courts have more discretion in allocating fees between former and successor law firms than I realized. Attorneys seeking fees in these situations should stress the relative contributions of their firm in the pleadings.
Posted by Michael W. Huseman No comments:

Email ThisBlogThis!Share to TwitterShare to FacebookShare to Pinterest
Labels: Collections, Fees, The Practice of Law

Scott Summers, a candidate for Illinois treasurer and a graduate of NIU Law, has proposed "slimming down" or even "mothballing" Northern Illinois and Southern Illinois universities' law school programs.

"We have three public law schools," Summers said. "And another seven or eight private law schools and a whole bunch of unemployed lawyers and underemployed lawyers. How long can we as taxpayers continue to support this?"

While the candidate said in a recent campaign website post he was grateful for the "tiptop legal education" he received at NIU, he said he is "counting beans today, not wallowing in sentiment."

Up until 35 years ago, he pointed out, the state had a single public law school at the University of Illinois. "We got by just fine with that," he said.

Email ThisBlogThis!Share to TwitterShare to FacebookShare to Pinterest
Labels: NIU Grads in the News, Politics

Credit information can no longer be used in employment decisions.

On August 10, 2010, Governor Quinn signed the Employee Credit Privacy Act (H.B. 4658) into law. The Act prohibits most employers from using an applicant’s or employee’s credit history or other credit information as a factor in any employment decision (e.g., hire, discharge, terms of employment).

Employers may not retaliate or discriminate against a person for exercising rights under the Employee Credit Privacy Act. Employers who violate the Act may be sued and ordered to pay damages including attorneys’ fees. Further, the Act does not allow waivers of the Act’s rights and invalidates any such waivers that exist.

The effective date of the Act is January 1, 2011.
Posted by Michael W. Huseman No comments:

Please note that you know have the option to share Northern Law Blog posts to Facebook, Twitter, etc., with the links placed directly beneath each post. If you see something you like, please spread the word.
Posted by Michael W. Huseman No comments:

If you are ever asked to draft corporate bylaws or an operating agreement on behalf of a client, I suggest that you add the following provision:

The winning representative shall decide the issue conclusively on behalf of the company.

I had a debate a couple of years ago with some former law school classmates about whether a rear-end collision could ever be someone else's fault.

I was at a tavern with some assistant state's attorneys. They were saying that a rear-ender could never be the front car's fault. I took the position that you should never say never, but at that time I could not articulate a fact pattern whereby the front car would be at fault.

Well, according to the Sun Times, a Cook County plaintiff is helping me make my argument. A motorist is suing a student driver and his instructor for a 2008 crash triggered by the pupil making a "sudden stop at a green light."

That is a novel theory and I hope it works, if only for bragging rights the next time I am out with prosecutor buddies, but I have my doubts. Why wasn't the plaintiff keeping a proper look-out?

Can anyone else out there think of a scenario where a rear-ender could be the front car's fault?
Posted by Michael W. Huseman 2 comments:

We are a comprehensive resource for information relating to the practice of law in Illinois. Although the Blog is intended primarily for other lawyers, we try not to be too technical. We have a diverse following of lawyers and non-lawyers alike. Click HERE to contact the Blog with questions, comments, or content suggestions.