Here is the whole complaint.

There are even quiet title and reformation of deed counts, meaning that Mrs. Sterling wants to take Stiviano's house because it was purchased with community property. That would be an interesting eviction proceeding once Mrs. Sterling gets title to that property.

This is how the plaintiff sums it up: "This lawsuit involves the activities of Defendant Stiviano, who, Plaintiff is informed and believes and thereon alleges, engages in conduct designed to target, befriend, seduce, and then entice, cajole, borrow from, cheat, and/or receive as gifts transfers of wealth from wealthy older men whom she targets for such purpose."

That must be how lawyers who charge $1,000 per hour write.

The Donald Sterling recording has been all over the news recently. Supposedly, the tape was released by V. Stiviano to gain leverage in a lawsuit that was filed against her by Donald Sterling's wife, Rochelle Sterling. Mrs. Sterling alleges that Mr. Sterling gave V. Stiviano more than $2 million in marital funds, including a $1.8 million townhouse, $240,000 in cash, and more than $500,000 in vehicles, including two Bentleys, a Range Rover, and a Ferrari. Mrs. Sterling wants her money back.

I'm still trying to locate a full copy of this complaint, but I do have the first page. Illinois is not a community property state, so I am not familiar with the law behind Mrs. Sterling's theories, but the titles of all ten counts are spelled out pretty clearly on this first page. You'll see counts for conversion, constructive trust, unjust enrichment, etc. If anyone has a copy of the full document, please let me know.
Tip of the hat to www.black-and-right.com for posting this photo, and also to Laura Erickson (@impetrio1) for directing me to it on twitter. 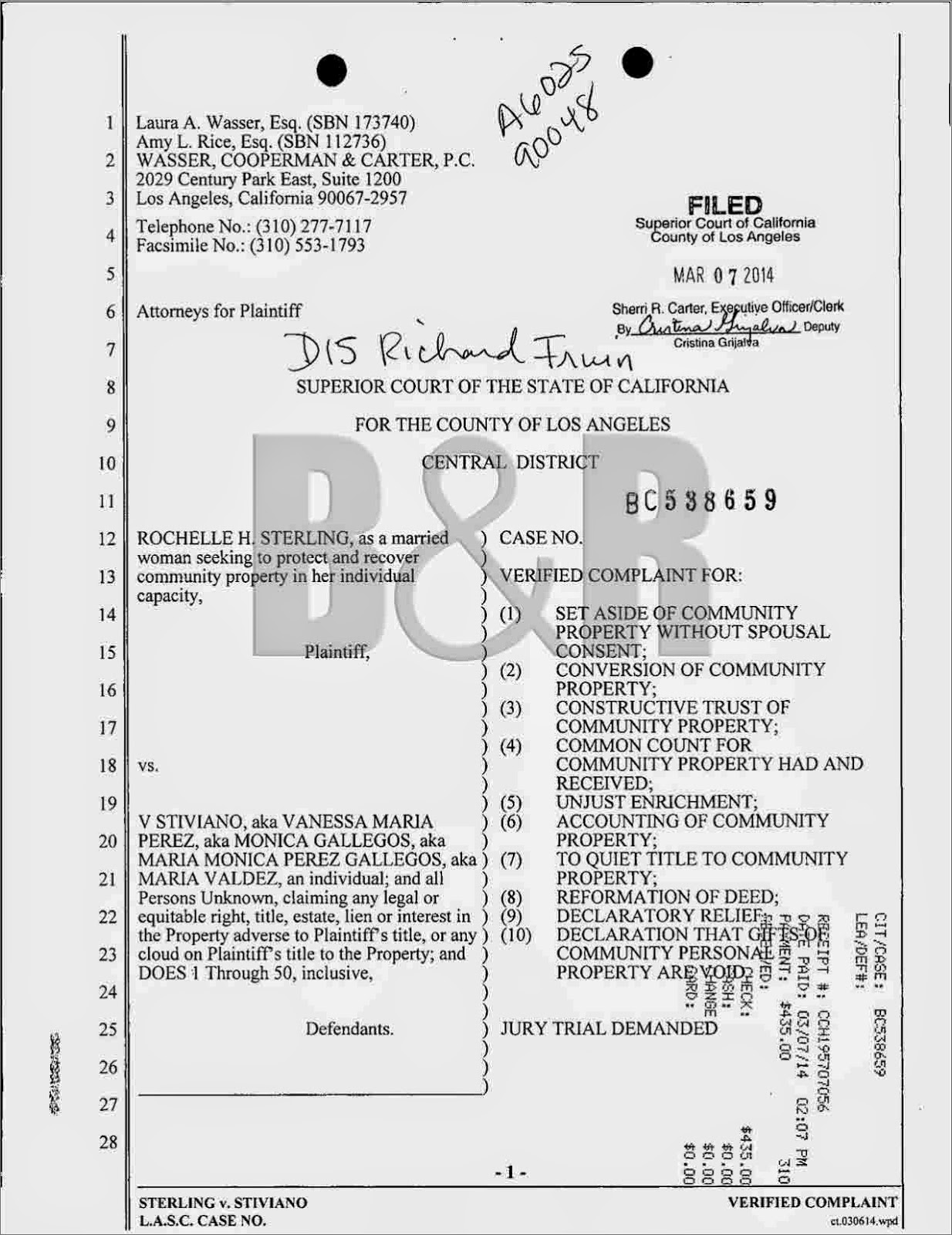 Blake would have been able to retire after this settlement.

All of the Northern people who read this blog know my friend Blake Cosentino. Blake likes to unwind with a cocktail. And when he makes a drink, Blake prefers clear ice. I have seen Blake spend more money on ice for a party than most people spend on hors d'oeuvres. I'm not kidding. That is why Blake is the first person I thought of when I read about this class action settlement.

In 2008, multiple class action lawsuits from around the country were consolidated into one mega case called In re Packaged Ice Antitrust Litig., No. 7-md-1952 (E.D. Mich.). The lawsuits alleged a conspiracy to raise and fix the price of ice against numerous major ice companies, including Arctic Glacier, one of the largest suppliers of ice in North America. I have read about this case before. There was direct evidence of an explicit conspiracy to steal hundreds of millions of dollars from consumers.

The lawsuit drove Arctic Glacier into bankruptcy and, as part of their reorganization, they have allocated more than $460,000,000 to settle the class action claims. Anyone who bought at least three bags of ice from Arctic Glacier between 2001 and 2008 will be entitled to a $6.00 settlement. Anyone who bought more than 10 bags of ice during that time period will be entitled to $6.00 for the first 10 bags and an additional $.60 for each additional bag. You'll need receipts to claim more than 10 bags. Claims must be filed by June 12, 2014. Here is the website: www.arcticindirectpurchaser.com. The problem, however, is that those purchases of ice must have occurred in either AZ, CA, IA, KS, ME, MA, MI, MN, MS, NE, NV, NM, NC, TN and/or WI.

What!!? Are you kidding me! No Illinois? And did you notice the dates? 2001-2008!! I met Blake in the fall of 2000, our first year of law school. We've been friends ever since. I know Blake keeps his receipts too. I know he could have made claim to a large portion of that 460 million dollar settlement if only Illinois was included in this class. It really could have been something. It's kind of depressing actually. Especially because I do feel partly responsible for some of those high ice bills, along with some of my unnamed co-conspirators from Old Orchard #4.
Posted by Michael W. Huseman 1 comment:

Email ThisBlogThis!Share to TwitterShare to FacebookShare to Pinterest
Labels: Settlement

I would like to thank the folks at Sterling Education Services for inviting me to speak at today's seminar in Rockford. The seminar was titled Fundamentals of Landlord-Tenant Law, and my particular topic dealt with the obligations of landlords and tenants.

HERE is a link to the written materials that I used for my presentation. These materials have been updated slightly based on several questions that I received from the audience, so this link contains the most recent version. I have also added this link to the Forms Archive section of the Blog.
Posted by Michael W. Huseman No comments:

A reverse mortgage is a type of loan available to an individual borrower who is more than 62 years of age and who has sufficient equity in his or her primary residence. A reverse mortgage allows a borrower to cash out the equity in his or her house, in exchange for a lump sum or monthly payments, without making any immediate payments back to the lender. The lender is not entitled to repayment until the borrower dies, the property is sold, or the house is no longer used as the borrower's primary residence.
All of that seems very straightforward, but what actually happens after the death of the borrower? Oftentimes, children may expect to inherit their parents' real estate and they may not even know that their parents had taken reverse mortgages later in life. There are very specific rules dealing with the timelines and payoff procedures which, if not followed, can lead to a mortgage foreclosure lawsuit. Children of parents who die with reverse mortgages risk losing the family home if they are not aware of their rights.
Under federal regulations governing reverse mortgages, heirs have up to 30 days from when the loan becomes due to determine what they want to do with the property, and up to six months to arrange financing. More importantly, there is a rule that allows heirs to pay 95 percent of the current fair market value of the property for a release of the mortgage. The difference offered by the 95 percent rule can be critical. Following the financial crisis, the disparity between the current value of a home and the total balance on the mortgage can often mean the difference between keeping a home and losing it to foreclosure.
If you are dealing with a reverse mortgage lender following the death of a parent, you may wish to consult an attorney to make sure that you understand all of your options.
Posted by Michael W. Huseman No comments: