Sometimes you want the public defender.

March 18, 2013 was the 50th anniversary of Gideon v. Wainwright, in which the U.S. Supreme Court unanimously ruled that states are required under the 14th Amendment to provide counsel to criminal defendants who cannot afford a private attorney.  I don't practice criminal law and I never really gave that case much thought after law school, but several news items over the past couple of weeks have made me think about it more.


Tom McCullough is a heck of a lawyer.  Recently, he represented William Curl, who was arrested for the murder of NIU student Toni Keller.  That case was all over the news last week when Mr. Curl entered a guilty plea in exchange for a 37 year sentence.  Since he has already served nearly three years, he will be released in approximately 34 years.

Following the entry of the plea, several lawyers involved in the case gave interviews on the courthouse steps out in Sycamore.  I have placed a link below to Tom McCullough's interview.  It's only about three minutes long and it's worth it.

When I saw that interview, I immediately thought about that article that I mentioned earlier.  I also thought about a lot of other interviews I saw last summer by private lawyers.  Anybody who wouldn't want Tom McCullough as their lawyer just because he's a public defender must be crazy.  Just watch the interview.  He's as cool as they come.

Just think what could happen if you hired a private lawyer.  You might get this guy: 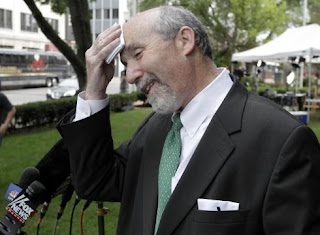